Peter Scott “makes a positive habit of avoiding the picturesque” says Roger Kizik, Scott’s co-exhibitor in the Chandler Gallery’s upcoming show, “Upon Closer Inspection.” The same could be said of Kizik’s art. Kizik’s works on paper depicting perfume bottles, underwear and museum statues make a dynamic counterpoint to Scott’s brooding urban landscapes and mythic Italian countrysides. Adds Scott, “I think both Roger and I value the role of humor and wit in our work. And we both draw squiggly.”

Kizik’s sense of humor is direct and inventive. The titles of his paintings—“Juvenile Gullinquent” for a young seagull and “Bust-ed Homer” for the head of the poet—set the tone for the visual jocularity to follow. “At the Met” features three classical busts in muted greens and browns set against a pink and turquoise background of lopsided concentric circles, like funhouse wallpaper. “At the Met II” shows two cupid-like figures perched on display pegs behind an official museum label, and, in the corner, a tennis ball. When Kizik reimagines the surroundings in which viewers would usually encounter these artifacts, the viewers can reexamine their ingrained responses to such historic pieces. Irreverence is one aspect of Kizik’s artwork, but so is respect, as Kizik’s playfulness invites the viewer to meet these antiquities on less intimidating terms.

Scott’s works on paper take the viewer out of the museum and into the streets, dodging the predictable and the picturesque at every turn. His cityscapes lack people, and only vestiges of habitation remain: advertising signs, buildings with darkened windows, and scaffolding. Not even the seats shown in “Christian Island Chairs” have sitters.

PickupIn “Pickup,” gray clouds gather above an open highway as a blue pickup truck journeys toward the horizon. The overcast day grounds the work in everyday life; a radiant sunset or a clear, blue sky might have idealized the moment, but the scattered clouds suggest a metaphor for rumbling along, enduring, even when the storm is building.

Scott’s more colorful pieces inspired by 18th century Venetian artist G.B. Tiepolo form a bridge between Scott and Kizik’s styles. In “Talking to Tiepolo – Puchinello’s Tomb,” a piece rich in historical references, Scott casts Puchinello, the everyman of Italian commedia della’arte, as a corpse, and brings a group of gawkers to his gravesite, including a figure in cargo shorts with a camera strapped around his neck. Once again, history is presented as a playground, and we are welcome to explore. 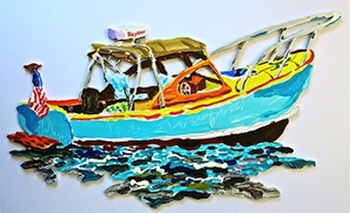 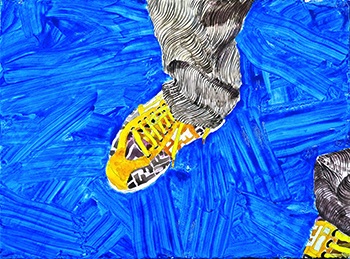 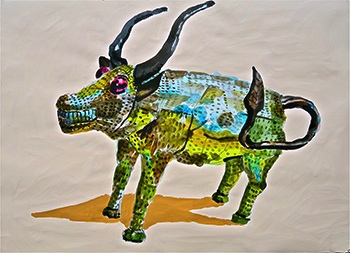 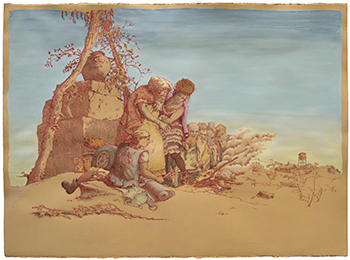 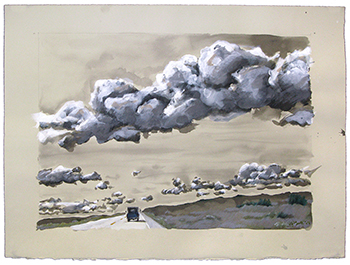