For 30 years, artist Bill Flynn has been collecting crushed gloves. He is fascinated by the way the random creases reshape each glove into a visually exciting flat piece. Flynn’s glove collection served as a major influence for his latest show at the Chandler Gallery: Each drawing borrows the techniques of folding and flattening to incorporate fortuitous rips and edges as part of the finished work.

“I’m activating both sides [of the paper],” says Flynn. “Bringing the torn energy from the back side to the front and folding its progress into another illusion.” The process of making the drawing is as important to Flynn as the finished artwork. He says he hopes that viewers will “mentally try to follow the folds” and uncover the steps he took to create each piece.

In “Folding Pages,” the top page is torn back to reveal the abstract lines, dots and smudges on the sheet below it. The other side of the page bears the smudged charcoal outlines of the torn sheet’s progress into its final folded form in the middle of the page. Standard conceptions of positive and negative space are confounded as the places where the torn sheet was—the top surface of the drawing—become negative space and the color fields beyond the torn sheet’s edge as well as the drawing behind the drawing become positive spaces. The torn sheet has a distinctive curve along the bottom edge, and this curve repeats itself in the impressions on the page, leaving a clue for viewers to trace. Flynn says he did not labor over these effects; instead, he finds “the accident, the serendipity of it…kind of thrilling.”

“Torn and Folded” is on display at the Chandler Gallery from April 24-May 19, 2017. The opening reception will be held on April 27 from 6-8pm. Maud Morgan Arts is a program under the umbrella of the Agassiz Baldwin Community, a private, non-profit organization that has provided quality programs and services in the Cambridge community for over 40 years. Maud Morgan Arts comprises a full arts program of classes and workshops for all ages, the Chandler Gallery, and a collection of original art by noted artist and community resident Maud Morgan (1903-1999). The agency works to reflect the diversity of talents of the community, bringing people together to make art, share art, and support visual arts education. 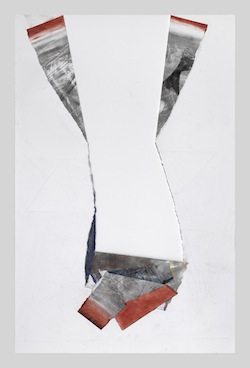 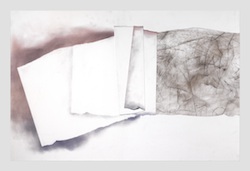 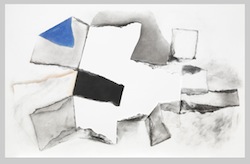