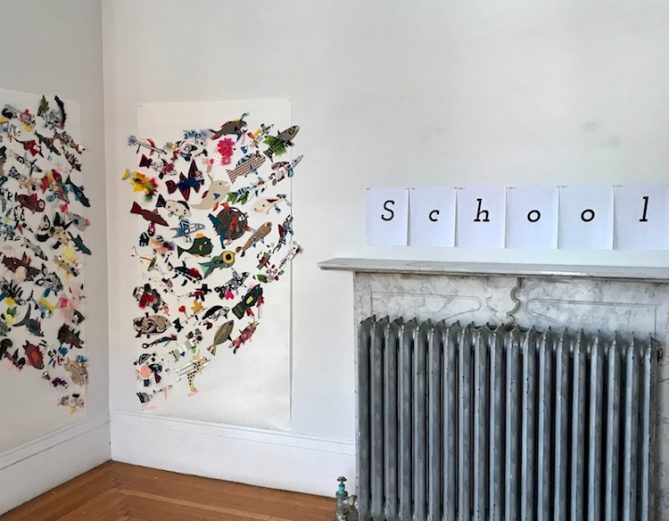 Fish Out of Water

As a tribute to its diversity and unity, students of the Maria L. Baldwin School have worked together to create “School,” an aptly named art show to reflect both where the creations come from and their theme: fish.

Students from all grades, JK through 5th, each made a fish to contribute, bringing the total number of work to 337 small, mixed media collages. The theme and content of the show, which goes on display December 3rd, were conceived by art teacher Lilli Martinez.

“I thought the motif would give the kids an opportunity to work on a similar theme while working as individuals and adding their own special details and personality to their work,” she said. 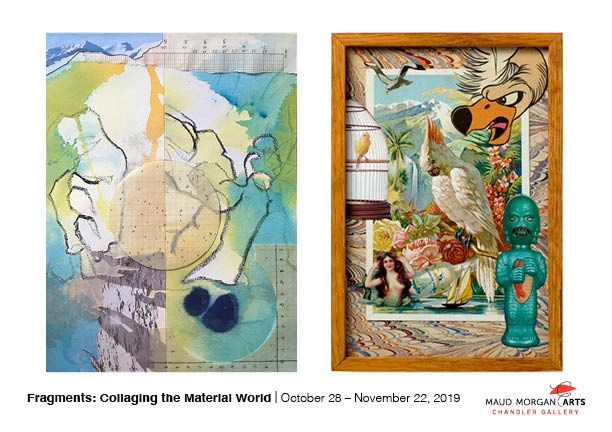 We currently live in a world of fragments: of juxtaposing moments. Snippets of text, flashes of ideas and images tumble through the air and stream into ears, eyes and minds at a dizzying pace. Our time is broken into smaller and smaller increments with days of crowded schedules collaged into 24-hour increments. 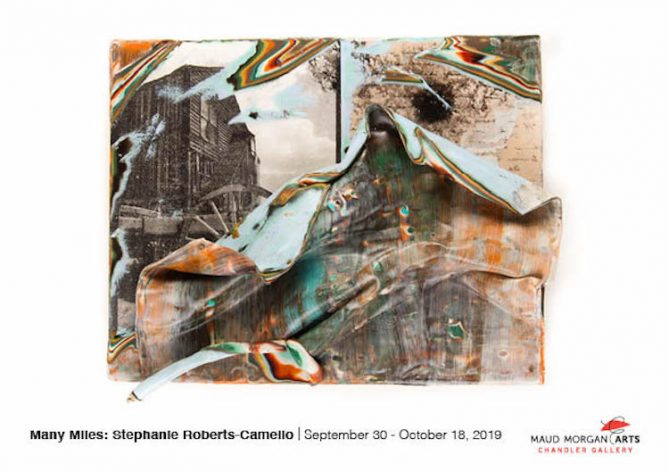 Discovering a box of old family letters in my family’s basement would change the way I painted and how I thought about my work. There were stacks of letters bound in twine according to who sent them. They dated back as far as 1919 through 1946. Many of these letters reference the dust bowl days of Texas and the Great Depression. I come from a family of cattlemen and farmers who were dependent on the weather for their survival. Loss of crops due to droughts and tough conditions in raising cattle are common themes coupled with money problems. These problems are not mine, but I couldn’t help relate them to obstacles and set backs that we all have.

Encaustic is a medium that can be worked flat or sculpturally. One of its many attributes is it can retain any stress mark or scrape once it cools. It has an innate feature for documentation. These letters; represent a period of suffering, loss and endurance in our country, and for me, the intricately-worked encaustic shrouds became metaphors for struggle and change. Layers of wax literally cover up the past. I peel them back to reveal a portion of what once was. 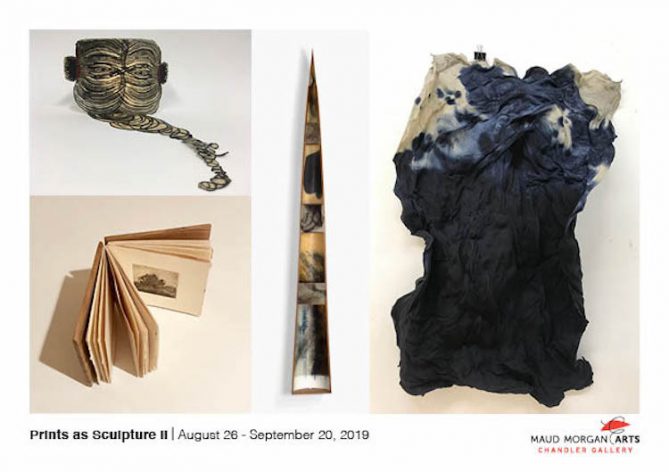 Chandler Gallery is excited to revisit the theme of sculptural printmaking! Artists submitted artwork that utilized at least one printmaking process to create a 3 Dimensional or Sculptural work of art. Artist books, freestanding objects, wall installations, paper sculptures are well represented in the current exhibit. 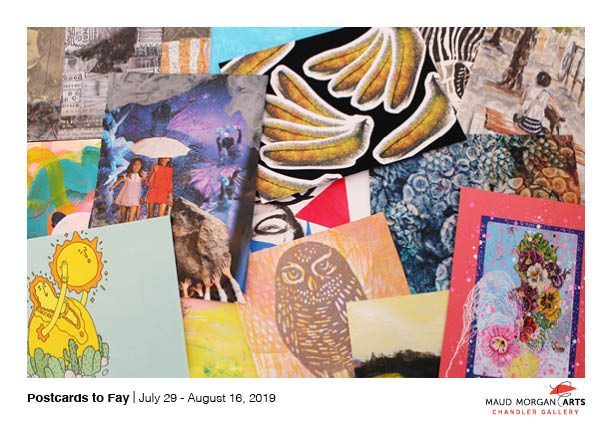 Postcards in Chandler Gallery Travel Through World of Art

Join us on Thursday, August 1 for a reception at Chandler Gallery and a fun filled event in the backyard –  Arts N’ Craft BREWS! 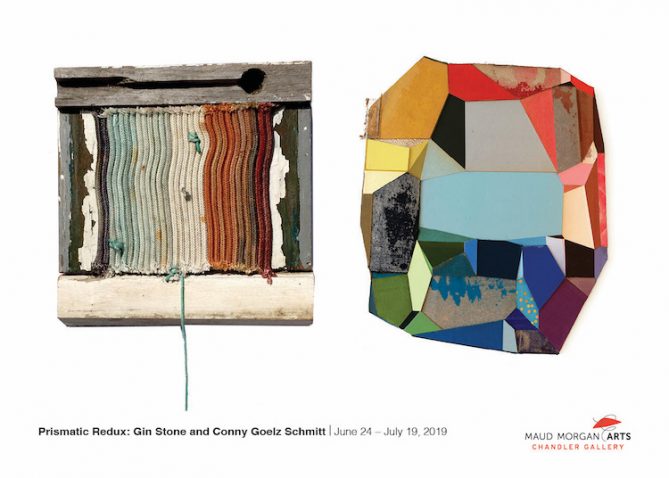 The work of the two exhibiting artists, Gin Stone and Conny Goelz Schmitt, investigates the prism’s deconstruction and re-assembly with reclaimed materials. Gin Stones’ assemblages are made from reclaimed long – line fishing gear that has been hand dyed and re-assembled in perimeters created from found objects. Schmitt’s work is created from vintage books, reconstructed in geodesic formations. 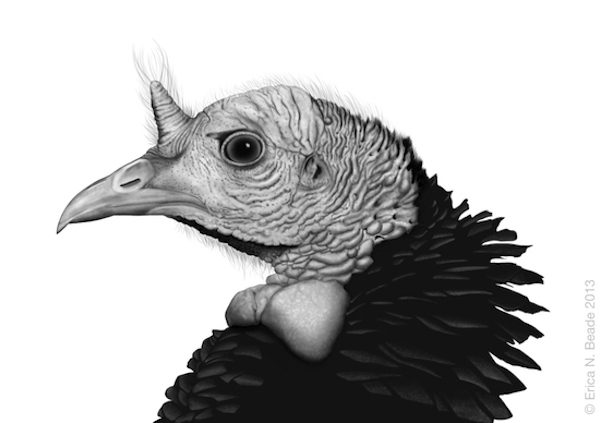 City Animals has its roots in the Cambridge Wildlife Puppetry Project (CWPP), a community art project that launched in 2012. It began as an elementary school family parade marching group representing Fresh Pond Reservation’s wildlife species in the Honk! Parade. It has, over the past seven years, become a familiar presence that brings local biodiversity into the public eye through participatory arts experiences across our city. The CWPP represents the full range of wild species in Cambridge from the beetle to the owl, from the alewives in the Charles River to the Great Blue Heron that are seen at Black’s Nook near Fresh Pond. Through giant parade puppets, masks, costumes, hand puppets, finger puppets, and representations of our city’s species in a variety of other media, including as wildlife trading cards the CWPP creates a form of celebrity for the uncelebrated— urban wildlife. The CWPP, now under the umbrella of the nonprofit organization Green Cambridge, has provided opportunities to celebrate local flora and fauna to children and families in workshops at the Center for Families, the Pathways for Family Success Program, and the Tobin Community School. 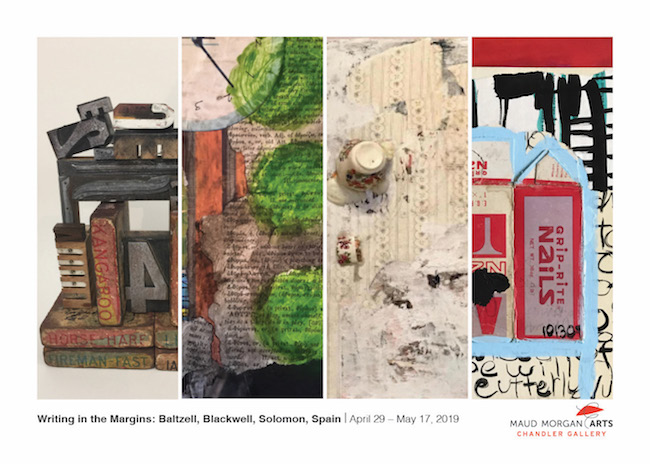 Avid readers will feel right at home in “Writing in the Margins.” The upcoming Chandler Gallery show, which features mixed media artists Lola Baltzell, Carol Blackwell, Amy S0lomon and Valerie Spain, is just as much of a celebration of how readers consume as it is of text and books themselves.

Baltzell explained that the title came from a song by John Gorka, whom she cited as her favorite singer/songwriter for his “evocative” and often ambiguous lyrics. For that reason, the show is aptly named. There is openness in “Writing in the Margins” and room for the viewer to insert themselves into anything abstract, just as readers might.

Despite visible differences between each piece, Baltzell noted how they share “many commonalities,” particularly in how “the pieces are worked and re-worked in many layers.” 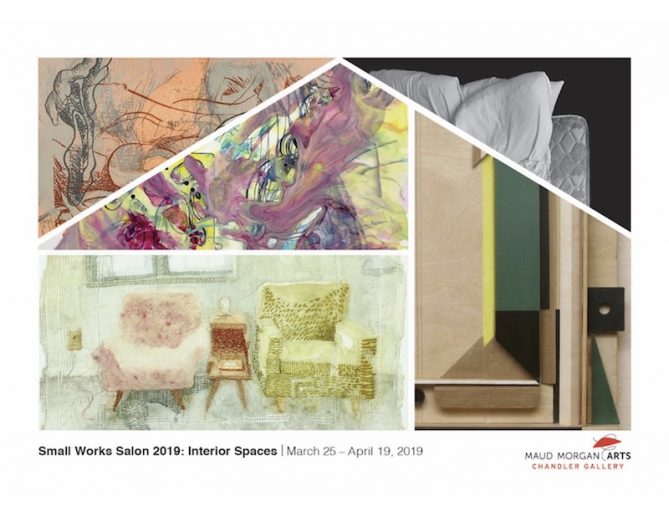 Inside Out: Interior Spaces and Beyond

The spaces we inhabit are equally influential on and reflective of who we are and who we become. That becomes clear in this year’s Small Works Salon, where the theme asks artists to focus on their “Interior Spaces.” Over 110 artists applied to be in the show, and the selections by juror Hilary Tait Norod will go on display at the Chandler Gallery on March 25th.

Many of the chosen artists zero in on details of home: Emily Murdock’s “Outside from Inside” is a series of photographs following light in different times of day and in different rooms, and Patty DeGrandpre’s “The Sitting Room” is a diptych focusing on a single black chair. 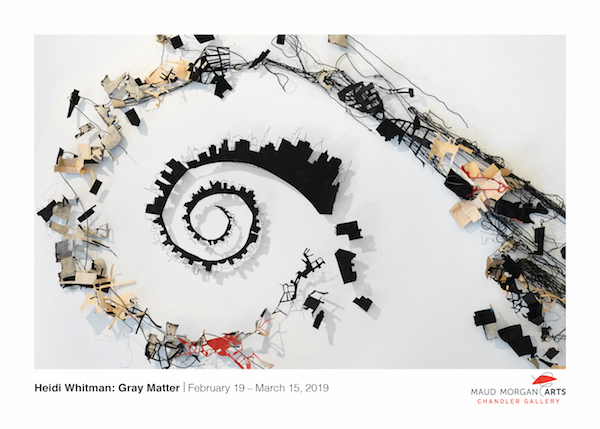 Thoughts and dreams don’t simply appear in our heads, though they often feel sudden and random. Instead, they travel from one part of our brains to another, creating a path of neurons and reactions that ends in our consciousness. In her upcoming show at the Chandler Gallery, “Gray Matter,” Heidi Whitman creatively maps these journeys in sculptures and drawings.

“The title refers to both my central interest in the mind, particularly memory, and to my materials,” she explained.