Artists can start picking up unsold cards after Monday, August 19. The gallery coordinator, Boriana Kantcheva will be in touch with the artists whose work was sold with the necessary paper work. If you do not get an email from me by the end of the show, please pick up your cards at your earliest convenience.

A big thank you to all who participated in this wonderful event!

Join us on Thursday, August 1 for a reception at Chandler Gallery and a fun filled event in the backyard –  Arts N’ Craft BREWS!

With the immediacy of our communication these days, postcards seem more like a relic of a bygone era than a desirable way to keep in touch. While we may not be sending them via snail mail as much anymore, they still represent a connection transcending any distance. That seems to be the key theme throughout “Postcards to Fay,” the latest exhibition at the Chandler Gallery.

In its last iteration, the postcard show honored Maud Morgan, but this year’s show asked artists to direct their work to the gallery’s namesake: Fay Chandler. The submissions bring all sorts of artists to the Chandler Gallery, such as mixed media, painters, graphic designers and even those just trying out a visual medium for the first time.

One eye-catching submission, Jenny Brown’s “Sumptuous Flowering Nebula,” is a celebration of postcards as an art form. She takes an antique postcard, an arrangement of colorful flowers on a bright blue backdrop, and adds embellishments of ink and acrylic paint splatters. The original postcard was smaller than the confines of 6×8, so Jenny layered a darker blue and dark pink beneath it. It both centers the image and levels it with her new additions.

In another, “Watching While Waiting,” the artist treats the small canvas as just that. Jessica Valderrama’s piece sets a scene in watercolors of a woman sitting alone with her dog in a park. What they’re waiting for is unclear, but the picture skillfully evokes the quiet moment in its subdued color scheme.

While these postcards may never see the inside of a mailbox, they’ve still done their job as intended. With pieces coming from different places, both in the physical and source-of-inspiration sense, the act of being side-by-side in one show has connected people in a small but profound way. It’s almost like a trip around the world inside a single room.

“Postcards to Fay” is on display at the Chandler Gallery from July 29-August 16. Its opening reception will be held at Arts N Craft Brews on August 1st 6-9 pm (rain date August 8th). 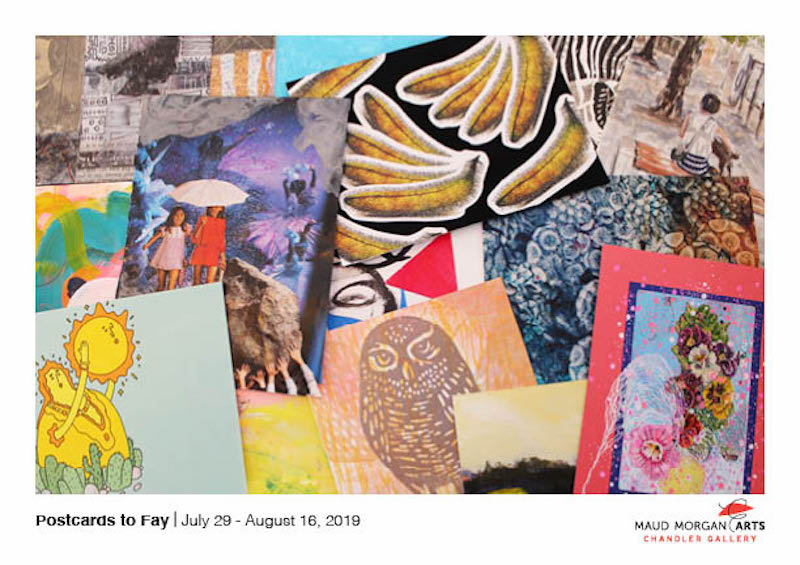 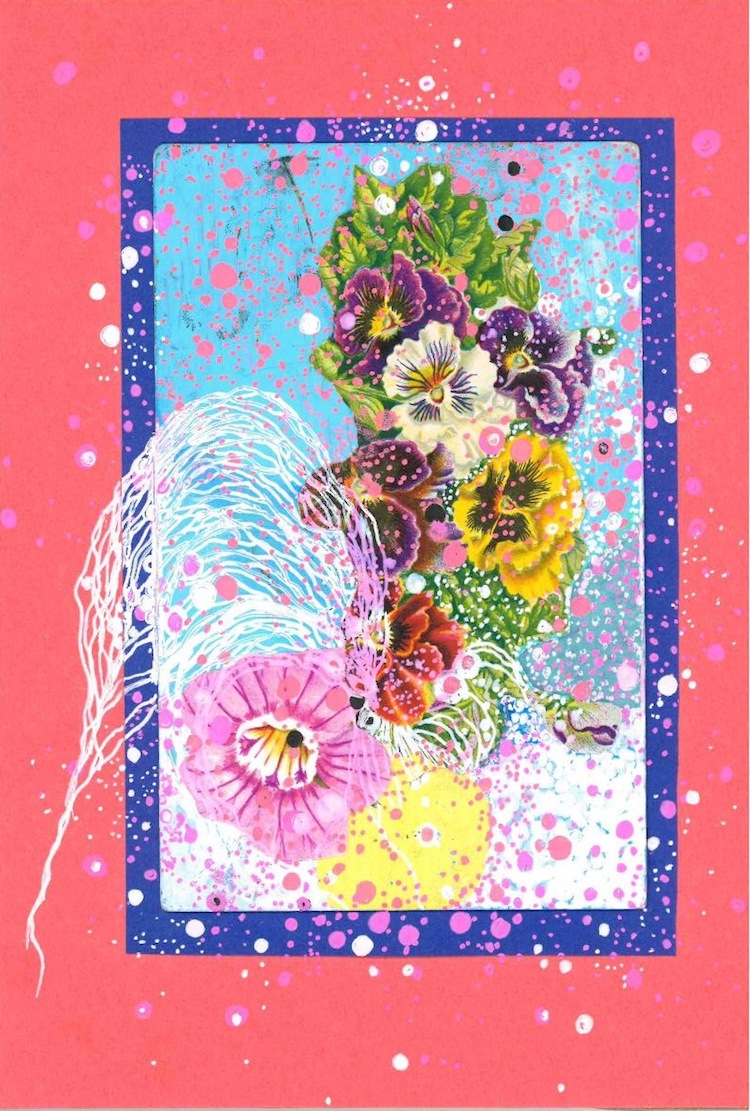 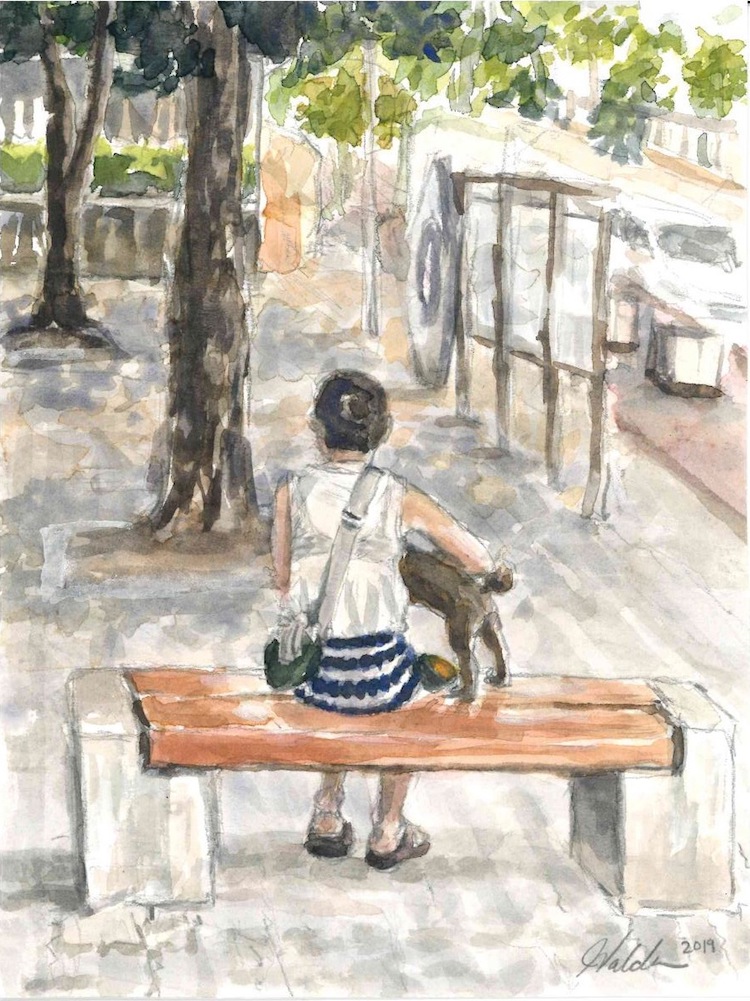 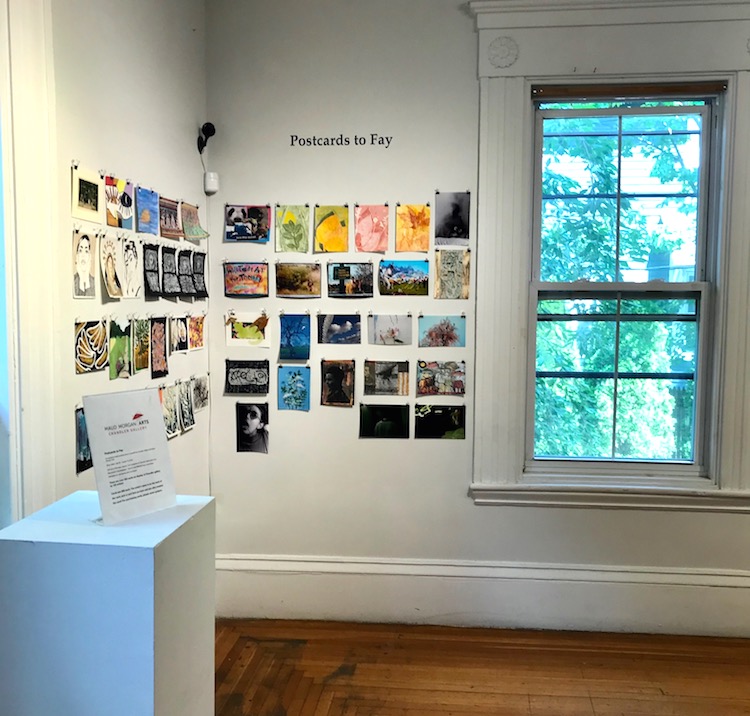 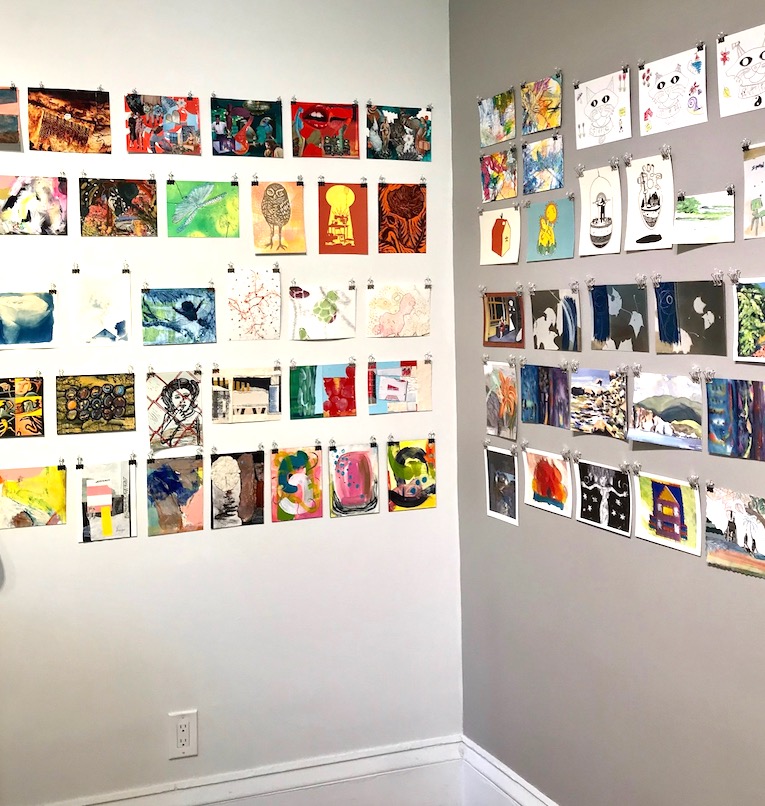