Here / There: Works by Wendy Prellwitz

“I wanted to challenge myself to represent water in unexpected ways”, says artist Wendy Prellwitz. The paintings and monotypes in her upcoming show at the Chandler Gallery juxtapose night with day, solidity with fluidity, and the concrete with the unknowable while depicting water in abstracted textures and shades of magenta, orange and black.

The exhibition is part of the annual Spirit Awards Benefit for Maud Morgan Arts, at which Prellwitz will be honored for her work as a Visionary in the Arts.

“What I like about water is it just takes your eye out, out, out, out, out, and into the beyond,” says Prellwitz. Her painting “Departure” places the viewer on a dock looking out at a bright moonlit sea and a dark sky. The piece contrasts the stability of the terra firma with the mysterious ocean beyond. However, the dock itself is composed of wave like brushstrokes and the blue hues usually associated with the briny deep. “Divergence Diptych” immerses Prellwitz’s signature watery texture (made from wood grain) in an abstract composition of gray and orange rectangles. The monotype plays with many dichotomies: hard-edged shapes contain squiggly lines, warm daylight colors intensify cooler nighttime ones, and the positives shapes tilt to create a pathway out of negative space.

“Peconic Days, Peconic Nights” is a three – paneled wood – framed screen that embodies both professional and personal connections. The freestanding screen, with woodwork by Dev Kernan, features two water scenes with sunlight on one side and moonlight on the other. The sunlight is a print while the moonlight is a painting, which allowed Prellwitz to use both her artistic disciplines in one piece. The scenes are views of Peconic Bay, where Prellwitz has a studio and summer home; the screen is reminiscent of works painted by her great grandparents, who were also inspired by Peconic Bay. 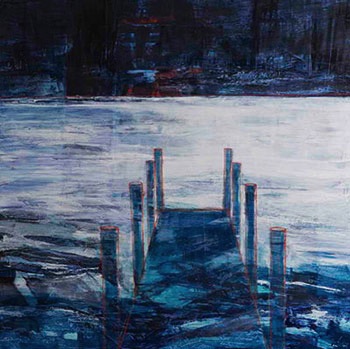 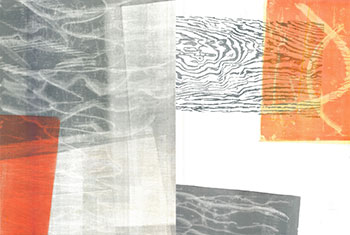